If the history of investing could be encapsulated in a textbook, an entire chapter could be dedicated to these last 16 months. Financial markets managed to squeeze decades of bizarre events into one year. These ranged from lockdown-driven stock-market turmoil to negative oil prices, “meme” stocks, NFTs (non-fungible-tokens), and zero-revenue special purpose acquisition companies (SPACs) with multi-million-dollar valuations. The headliner in this roster of head-spinning stories is the cryptocurrency craze.

As the popularity of cryptocurrency has surged, a closer look at the details is warranted. We always try to understand what drives any investment thesis. Along with that, we evaluate investments in the context of risk management and diversification. The ultimate goal is to filter out the noise and determine if it can improve the overall portfolio.

We can start with a very broad definition of cryptocurrency. Given the complexity, capturing the essence in a few sentences will almost certainly fall short. But we point to a definition from one of the most popular cryptocurrencies, Bitcoin, for some insight. According to their website (https://bitcoin.org/en/faq#what-is-bitcoin):

“Bitcoin is a consensus network that enables a new payment system and a completely digital money. It is the first decentralized peer-to-peer payment network that is powered by its users with no central authority or middlemen.”

At its core, cryptocurrency is intended to facilitate rapid and secure financial transactions using blockchain technology across a secured, decentralized network that avoids the use of fiat currencies issued by sovereign countries. The blockchain technology has great potential for various uses apart from cryptocurrency and is already being put to productive use in other ways.

Why So Much Hype?

Any potentially groundbreaking technology has futurists and visionaries espousing the potentially world-changing ramifications, which could shake the foundations of our global financial systems. This certainly sounds enticing, but what’s driving much of the recent interest is demonstrated in the chart below. The age-old prospect of another way to “get rich quick” (with minimal effort) has proven yet again to be tempting to many investors. There are certainly some long-term investors buying cryptocurrency, but many are buying with the hope that someday soon they can sell it to someone else at a higher price. This is not investing, but pure speculation.

If Bitcoin experienced the same returns as the S&P 500 over the last 16 months, would there be so many talking about it?

Why We are Cautious

A key aspect of the bull case is that cryptocurrency is everything a traditional fiat currency is not. It is designed to have a finite number of coins. This in theory means it is not subject to a government’s proclivity to “print” money, which can drive inflation and help with debt but reduces the currency’s purchasing power. It is no coincidence that prospects of inflation have driven investor interest in cryptocurrency as a potential hedge. But there are many reasons to remain cautious about cryptocurrency: 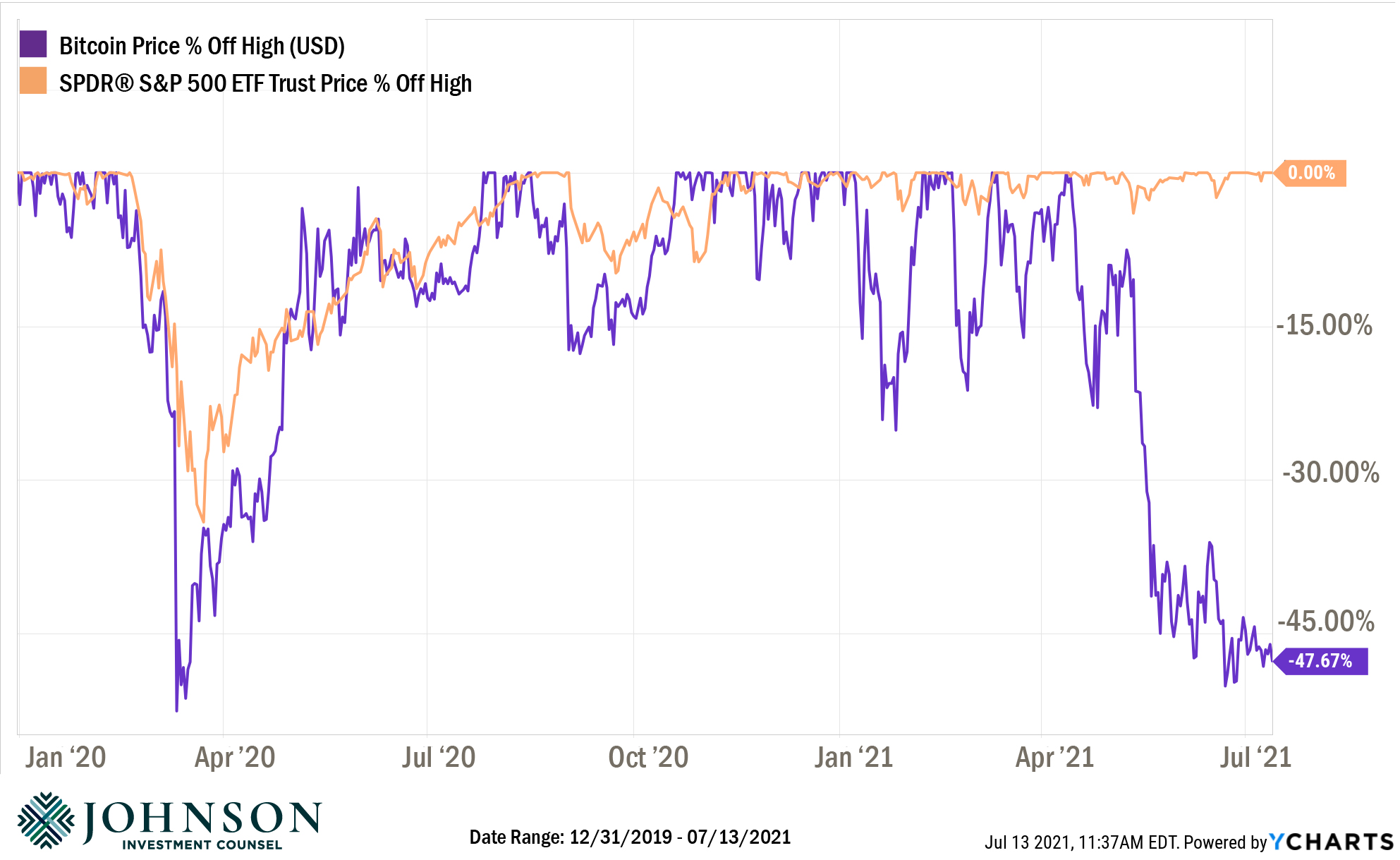 The crypto-craze has several parallels with the dot-com bubble of 1999 – 2000, including several price charts. But even more striking is “The Barbershop Factor,” where even the barber (or neighbor, Uber driver, mechanic, college student, etc.) can be heard telling others how they are “killing it in crypto” and reaping life-changing profits. It could be different this time (the most dangerous words in investing). However, when it seems nearly everyone is talking unprompted about how they are doing with their crypto holdings it could be a sign of peaking investor sentiment and potential pain ahead.