The first quarter GDP report caught many investors by surprise, revealing an unexpected decline in real GDP. While unsettling, the decline was more of a statistical anomaly than a sign the economy was screeching to a halt. Before accounting for the impact of inflation, so called “nominal” GDP actually rose at an annualized pace of 6.6% during the first quarter – well above the average growth rate during the previous expansion. Persistently high inflation, however, took an unusually large bite out of economic activity and contributed to the decline in inflation-adjusted or “real” GDP. The trouble is, many economists are predicting that the same pattern may repeat itself during the second quarter, resulting in two back-to-back quarters of negative real GDP growth.

If your economic alarm bells are going off, you certainly aren’t alone. As the probability of two consecutive negative quarters grows, so too has the chorus of investors calling for the official start of an economic recession. In reality, however, it’s not quite that simple. While the mainstream definition of a recession has long been considered two back-to-back quarters of negative real GDP growth, the technical definition of a recession is far more complex. The National Bureau of Economic Research, or “NBER”, is an independent research agency that is responsible for officially dating when recessions begin. According to the NBER’s website, their traditional definition of a recession is “a significant decline in economic activity that is spread across the economy and that lasts more than a few months”. Furthermore, there are six important criteria that they focus on to inform their decision making. These criteria include changes in real personal income, nonfarm payroll employment, real personal consumption expenditures, wholesale-retail sales, household employment, and industrial production. While there’s no arguing that the economy has started to cool off, none of these six criteria are at levels that have typically coincided with recessions. Take, for example, the labor market. The unemployment rate remains at historic lows, unemployment claims remain subdued, and the number of job openings is still far outpacing the total number of unemployed persons – all signs of a still robust labor market, not an impending economic recession. 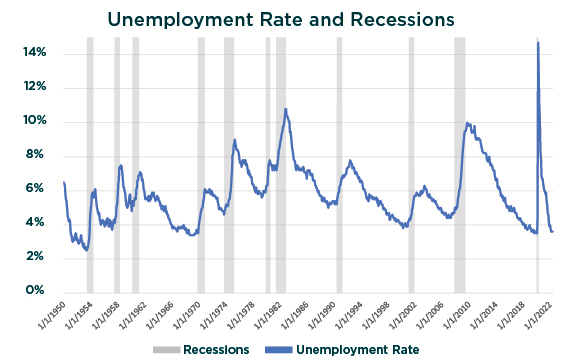 Ultimately, there’s a good chance that the second quarter GDP report released later this month may reveal another quarterly decline in real GDP. While unsettling for investors, we hesitate to believe that the NBER will label this an economic recession, due to the uniqueness of the current environment. That’s not to say, however, that the economy won’t head in that direction over time. Aggressive Federal Reserve policy tightening and rising costs for consumers have historically been reliable precursors to recessions. While the odds of a recession in the next twelve months have increased, we’re watching the NBER’s six criteria very closely – particularly the labor market data – for signs that a true recession might be around the corner. Should the economy continue to deteriorate, it’s important to keep in mind that our high-quality investment discipline is designed to offer downside protection and peace of mind during volatile markets. Furthermore, while Fixed Income returns have been historically challenging to start this year, we continue to believe that bonds play a crucial role in safeguarding portfolios – especially in the event of a recession.

For more information on how we’re evaluating the odds of a recession, please feel free to reach out to your Portfolio Manager or any member of the Johnson Investment Counsel team. JOHNSONINV.COM  | 800.541.0170.